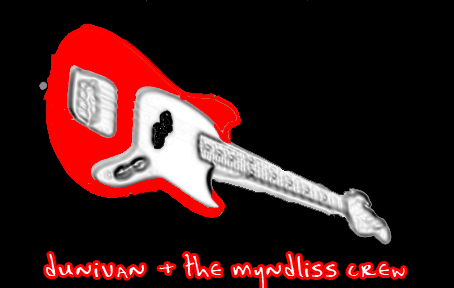 dunivan + the myndliss crew are a band from florida, they were created by bryant dunivan in june of 2005 as a project band to help him record his debut record “liveadaptevolverepeat”. the myndliss crew at this time featured bill cage on keys/organs + production and tim fox on drums + samples. bryant dunivan played bass + did some spiel on the debut record. liveadaptevolverepeat was released on march 7th, 2006.

fast forward a year and a half to december of 2006, and bryant had another batch of songs written up for the myndliss crew. recording of this second record, entitled “sometimes the underdog wins” started in december 2006 and was finally finished in january of 2007. the myndliss crew at this time featured bill cage on keys/organs, acoustic/electric guitar, and backing vocals. bryant dunivan added the bass, acoustic/electric guitars, and the spiel. production was handled by bryant and bill and mastering took place at the chill spot studios. the record was released digitally on february 1st, 2008 and the physical cd came out later that year.